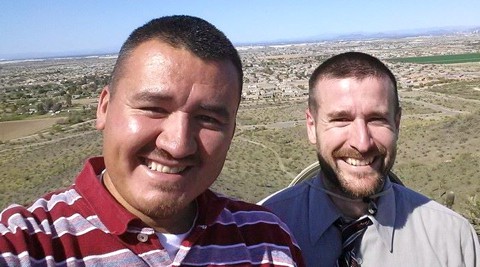 Pastor Steven L. Anderson (above right), of Faithful Word Baptist Church in Arizona, made headlines earlier this month when he said the world would be AIDS-free by Christmas if we simply stoned all gay people to death.

Anderson has also said that gays are "basically rapists" and compared them to ax murderers and Hitler.

Now, it appears Anderson has a disciple who is every bit as hateful as he is.

Last Sunday, Romero delivered a sermon called "Public Example" in which he also called for gays to be put to death:

"And amen to what Pastor Anderson said — I'm not going to let any of these dirty faggots inside of my church. They are all pedophiles. … They're always trying to rape and hurt other people. They're relentless. They are relentless. They are predators and given an opportunity to snatch one of your children, they would do it in a heartbeat."

Watch the clip as well as Romero's full sermon, AFTER THE JUMP …