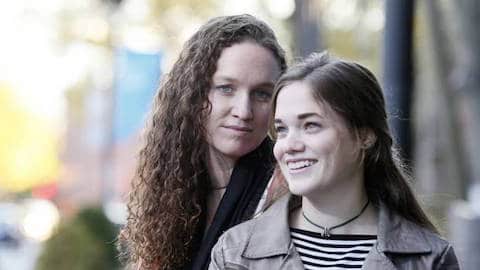 A former member of listed hate group the Westboro Baptist Church has travelled to Jamaica to work with gay people who have been ostracized by society and made homeless, reports Pink News.

Grace Phelps (pictured above right with sister Megan), the daughter of Westboro Baptist Church spokeswoman Shirley Phelps, went on a trip organized by Planting Peace, a grass roots equality project which runs Equality House with a base opposite the Phelps family church.

“I spent twenty years learning why God hates gays, preaching that they’re ‘beasts’ and ‘depraved,’ and protesting anyone who dared to speak up for them.

“When I heard about the young people living in Jamaican sewers because their parents kicked them out for being gay, my heart hurt for them.

“I know what that’s like, being rejected by your family for not going along with their beliefs.

“There’s an irony there that I couldn’t ignore: that I share a fate with the very people I was taught to dehumanize so fiercely. I wanted to meet them, to see their plight for myself, and help tell the world their story.”

“Grace and I have become good friends since she left the church, and she jumped at the opportunity to join with Planting Peace and help document the conditions in Jamaica when I told her what was happening there. What we witnessed in the sewers of Kingston was nothing short of horrific.

"We documented acid attacks, stab wounds and even personally witnessed an altercation. The world has made great strides in the fight for equality, but this trip was a sobering reminder of how far we still have to go.”