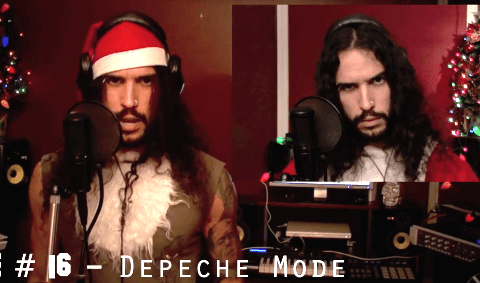 Looks like Mariah has some competition. After Carey got some serious internet flack for flubbing notes on her holiday hit at Rockefeller Center's tree lighting ceremony, singer and popular YouTuber Anthony Vincent has released his own unusual version of "All I Want For Christmas" in the style of 20 different singers. Vincent's take on the now 20-year-old Christmas classic runs the gamut from Nat King Cole to Depeche Mode, with a spot-on imitation of the song stylings of Thurl Ravenscroft (aka the original Grinch).

The talented 26-year old singer/songwriter (who is a bit of a ringer for hot Chili Peppers frontman Anthony Keidis) has taken off over the last few months by specializing in these mash-up covers of pop hits from superstars like Katy Perry and Michael Jackson. Now this latest video from his Ten Second Songs channel might be his biggest hit so far. While it's hardly the first Carey cover to go viral, Vincent's version went up on YouTube less than 24 hours ago and has already racked up over a million hits.

You can watch the full video AFTER THE JUMP …