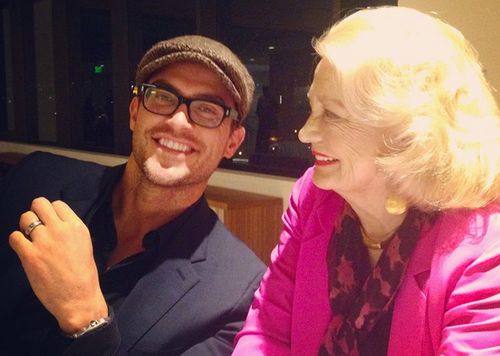 Cheyenne Jackson's gone Hollywood. Though the 39 year old actor and self proclaimed "Broadway Baby" came to fame via musicals like "All Shook Up" (Theater World Award, 2005) and "Xanadu" (Drama Desk nomination 2008) and promises to return, TV and film came calling soon thereafter and appear to have stuck. His most notable early filmed roles were as a heroic passenger in the Oscar-nominated true story United 93 (2006) and a recurring gig on Emmy favorite 30 Rock as Danny Baker, a singing actor with a voice so beautiful he gave Jenna Maroney "rage strokes." 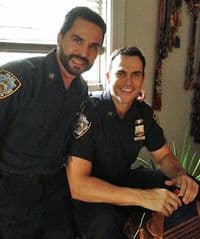 That first flush of mainstream success seemed to have been briefly eclipsed in the media by upheavals in his personal life, a divorce from his first husband and sobering up. But Cheyenne is eager to move on from that topic which he feels was overblown by the media. "Definitely with the gay press, it was rough there for a bit. Things were never not together; I think that's the misconception," he explains. Was it a rough patch? "I guess other people can think of it that way but to me it was just the next chapter. Time to clean up."

And the next chapter is moving along well. After his brief note-perfect cameo in the Liberace movie Behind the Candelabra (2013) he's filmed several more roles including a small part as half of a gay cop couple affectionately referred to as 'The Policewomen' in one of this year's very best films LOVE IS STRANGE (2014, reviewed here). Ira Sachs moving drama recently won a handful of Spirit Award nominations.

As a longtime fan of Cheyenne Jackson, I confess to an atypical case of the nerves during our phone interview from separate coasts. Cheyenne helpfully tells me to imagine him in his underwear, and we both laugh immediately realizing that is not going to help. 'No wait. Maybe not. Maybe not'.

NR: Things seems to be on a real uptick in terms of your movie career!

CHEYENNE JACKSON: I’ve really kind of thrown myself into film and it’s been great. Some make their way to theaters, some go video on demand, some get nominated for things. I live out here now so it’s easier.

NR: Your new film SIX DANCES IN SIX WEEKS just opened this weekend. We don't see Gena Rowlands in lead roles much these days but she's one of the most influential actors of all time. How did your casting happen and how nerve wracking was is to work with her? 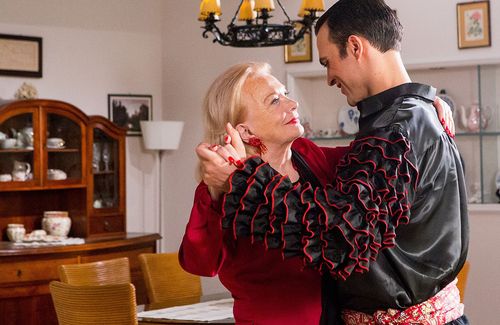 CHEYENNE JACKSON: I was in New York and literally got a call from my manager 'Would you like to star opposite Gena Rowlands in a film shooting in Hungary for two months? AND IT STARTS IN TWO DAYS.' [Laughs] ‘Give me a second. Let me sit down.’

There were several actors that really had an impact on me —  I started acting late. I was 27 so when I did throw myself into it I was really gravitating towards certain parts, certain characters, certain personalities and really Gena for some reason I just always always always loved. It started with Gloria, then A Woman Under the Influence. And Opening Night of course because all things Broadway.

And then I read the script and I saw that I had to be horrible to her and call her a "stupid old cow" within five minutes.

I hated you in that moment and I'm a fan. Were you worried the audience wouldn't forgive you?

More than that I thought ‘How am I going to physically do this when I worship her so much? I got there and she was so gracious. I said ‘Listen, I just gotta get all this stuff out of the way Miss Rowlands…' And she said

Oh, please. Call me Gena. Worship me for a bit and then let's get on with it."

And then we did!

[Laughter]. That's great. But no time to prepare and thrown in. Does that happen a lot?

Yes. I've shot three more since this film and I know how they come together – it’s a big puzzle. I’m thankful that Sean Hayes [who had originally been cast] was busy. 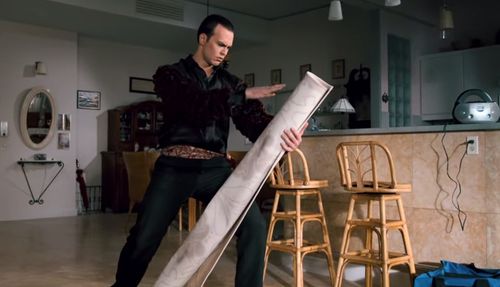 Dance Lessons isn't a musical but did you feel that given your musical background the dances would be the one area where you could lead and Gena would follow?

Yes, definitely. I mean, I haven’t taken dance lessons except for tap when I was in “Millie”. But I have been in a bunch of Broadway shows and I can fake it really well. I  knew in some aspects I had an advantage there in terms of confidence. Kay Cole is our choreographer [the original Maggie in "A Chorus Line"] — she's an amazing, powerful woman. I had to learn the steps but also so much of the exposition, the history of the dances, all while teaching them to Gena.

The dances, where they’re placed in the movie… it isn’t arbitrary. The cha-cha is first, not too personal, and then the tango and then the waltz as it gets more personal.

Rita Moreno, a bonafide musical legend, is also in it. But you didn't have scenes with her!

She was in Budapest so she was there — I had met her before around New York. She can still kick! I was hoping we’d have some stuff together.

But you got to work with another Oscar favorite, Jacki Weaver. How many times did she want to rehearse the scene where she grabs your butt?

[Laughter] We had a lot of fun. Jacki is hysterical. Totally game, silly and fun. And a big musical theater star in Australia.

Your rapport with Gena is so crucial to the movie working — was that hard to map out? — because you start out antagonistic but then you become each other's surrogate everything in a way.

That’s perfectly put. We became mother/son, brother/sister, best friend/life partners really towards the end. We discussed where we were emotionally before every scene in terms of how comfortable [the characters were] because in life we’re really comfortable with each other. She’s become a great friend but it was important that the very first scenes be very uncomfortable in order to have the pay off at the end where you see the gentleness and the care.

Your other film this year, LOVE IS STRANGE. arrived at a perfect time given the wave of marriage equality victories and I assume it was an affecting time for you, since you recently got married? 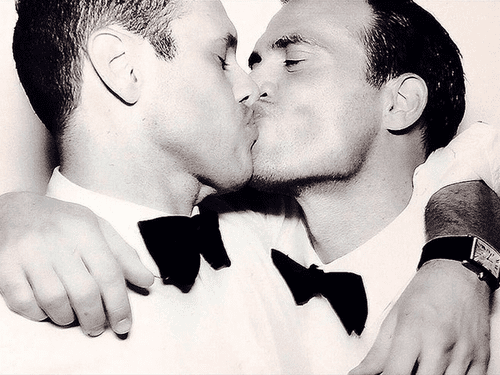 Every gay story I relate to in some way for obvious reasons. But this movie was very special for the type of people it dealt with,  two older men – a long term couple. I thought it was so wonderfully handled. Very low budget indie but such a great script and director that these amazing Oscar peeps signed on. Watching John Lithgow and Alfred Molina on set — they had never worked together though they’d been friendly and, really, they had one day to create a 30 year relationship. The very first scene we shot was the scene right after their wedding when we’re all sitting around and singing.

It was incredible. It was definitely a great movie to be part of socially. But also just as an actor it was like 'WHAT?!?' watching these two great guys. 'And now here’s Marisa Tomei doing a monologue!'

That cast is just…I totally cried watching it at Sundance. Easily one of the best movies of the year.

Since you're making a lot of movies now but also playing a lot of gay roles, how competitive do you feel it is? There are so many more openly gay actors than there were just a few years ago. It's amazing.

I love that there are more out actors. It’s fantastic. It makes it less of an issue. It’s not, like “openly gay blah blah blah." People are just now people. They don’t have to have the words “openly gay” before their name.

I mean, I’m booked. Knock on wood. I’m booked for the next couple of years. A lot of exciting things – some big stuff that I can’t talk about yet. I guess I’m up for the same roles as some of my peers  but, you know, Neil Patrick Harris and I are not going to be up for the same roles. I think there’s room for everybody.