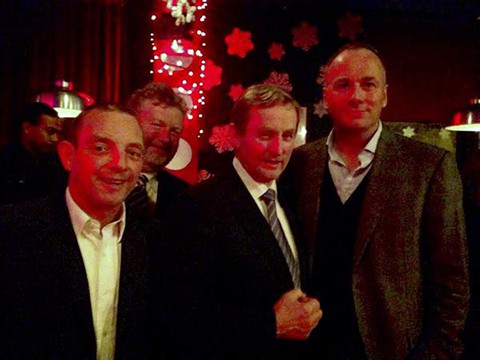 Kenny showed up at Pantibar – which is owned by LGBT activist Panti Bliss – for Christmas drinks for his party’s LGBT group.

Kenny is leader of conservatives Fine Gael and has in the past been reluctant to state his position on the issue of same-sex marriage. However, he told Gay and Lesbian Equality Network director Brian Sheehan that he would be campaigning for a referendum on the issue to be passed. The referendum is expected to take place in early 2015.

The chairman of Fine Gael LGBT said the Taoiseach dropped in to show his support for the LGBT group and recognize its work on the gender recognition bill, the family relationship legislation and the same-sex marriage referendum. Panti Bliss herself tweeted out the above picture of Kenny with the caption: "So there's An Taoiseach (for the foreigners, that's the Prime Minister of Ireland) in Pantibar."