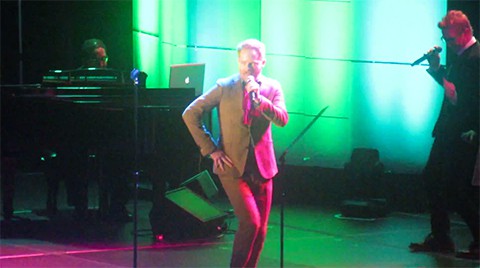 Out Modern Family star and marriage equality advocate Jesse Tyler Ferguson took part in the Trevor Project's TrevorLIVE event in LA and decided that Taylor Swift's "Shake It Off" was an appropriate anthem to perform at the event, reminding audience members that even though there are haters in the world that are gonna hate, hate, hate, sometimes you just got to shake it off. Because after all, instead of getting down and out about the liars and the dirty, dirty cheats of the world, you could have been getting down to a sick beat.

Modern Family's Sarah Hyland, who is close with Swift, shared Ferguson's performance on Instagram which quickly gained the seal of approval from Swift herself.

Watch the performance, AFTER THE JUMP…

Previous Post: « ‘Pearl of Africa’ Delves Into The Life of a Transwoman Openly Transitioning in Uganda – WATCH
Next Post: Austin May Become First City In Texas To Offer Trans-Inclusive Healthcare Benefits To Employees: VIDEO »