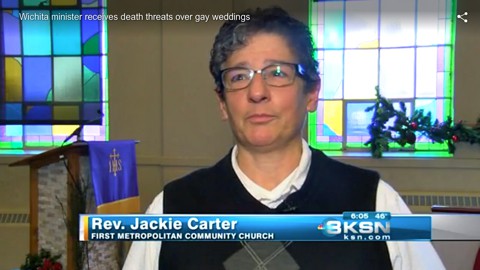 The pastor of the Metropolitan Community Church in Wichita, Kansas, says she's been receiving about one threatening phone call a day since same-sex marriage became legal there last month.

The Rev. Jackie Carter says the calls have ranged from heavy breathing to someone threatening to cut off her head off and carry it through the town square on a stick.

This past Monday, someone called the church, rang the doorbell and threw rocks at the windows all at the same time, The Wichita Eagle reports:

“Honestly, I’m beginning to get more scared every day that this goes on,” she said. “I’ve kind of talked myself into trying to be more calm about it and realizing that there are more people out there that are supporting us than threatening harm to us.”

She said the church has instructed people to leave the building in pairs, especially at night, for safety. Carter said that she has reported some of the threats to the Wichita Police Department, but that the department’s ability to investigate is limited because the callers have been anonymous and no number shows up on the church’s caller ID.

Even a leading opponent of same-sex marriage, conservative Wichita pastor Terry Fox, is condemning the threats:

“Anybody who does something like that, there’s nothing Christian about threatening someone bodily damage or something like that. In fact it’s about as unchristian as anything can be,” Fox said. “And it helps no one’s cause. If anything, it hurts that cause. It breaks my heart to hear that anyone would have to endure those kinds of threats from the right or anywhere else.”

Last month, Carter performed a group wedding ceremony for 15 same-sex couples on the steps of the county courthouse. The ceremony was interrupted by a protester chanting "God says no," but the wedding party drowned him out with chants of "God says yes" as he was led away.

Watch KSN's report on the threats, as well as last month's same-sex marriage ceremony, AFTER THE JUMP …