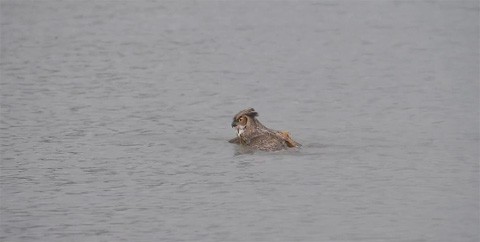 A Great Horned Owl was forced into Lake Michigan by two Peregrine falcons at Loyola Park Beach in Rogers Park, Chicago. According to the guy who shot the clip, it eventually got out and flew away.

Wrote the videographer: "Hey, I had no idea it would go viral or I would have made it ten or twenty seconds…I didn't see the falcons knock it in, and had no idea when it would come out, and when it finally did I was busy standing between it and the Peregrines as they were dive-bombing it something fierce."

Watch the strange 8-second sight, AFTER THE JUMP…