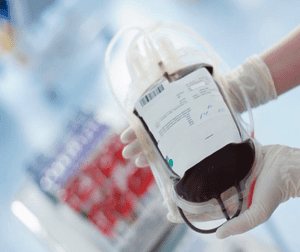 The FDA Committee is meeting today to discuss proposals of removing the ban that prohibits gay men from donating blood reports The New Civil Rights Movement. Talks of repealing the ban appeared last month when The Health and Human Services Advisory Committee on Blood & Tissue Safety & Availability voted to drop the ban for any man who has not had sex with another man in at least a year. A Williams Institute study finds that repealing the ban would save over 1.8 million lives.

However, the one-year abstinence stipulation is still considered discriminatory, and the few gay men that are eligible to donate would yield little increase in the amount of blood donated. Ryan James Yezak, found of the National Gay Blood Drive, finds the new stipulation discriminatory and absurd.

"The policies that are in place, the lifetime ban, perpetuates negative stereotypes and stigma. It assumes that all gay and bisexual men are likely to have HIV and therefore must be blanket banned and that's just not necessary in this day and age when they have the testing and other countries have moved to deferral time period."

Although Yezak is disappointed with the methods of the new stipulation, he agrees that it's at least a step in the right direction toward repealing the ban completely. Of course, the anti-gay right wing disagrees. Anti-gay activist Peter LaBarbera, the head of Americans for Truth about Homosexuality, staunchly affirmed his position on keeping the ban.

"First of all, HIV rates and sexually transmitted diseases are rising among homosexual-practicing men. So why would we be talking about softening the blood ban at a time when [STDs] are on the rise among men who have sex with men?"

The ACLU disagrees, saying criteria for becoming a blood donor should be based on science, not misinformed assumptions and discriminatory stereotypes. LaBarbera and his fellow constituents choose to ignore the fact that HIV is as much an issue for heterosexual people as it is the LGBT community. Fortunately, President Obama reaffirmed his support of those living with, and affected by, HIV and AIDS in a speech the day before the observance of World AIDS Day this year.