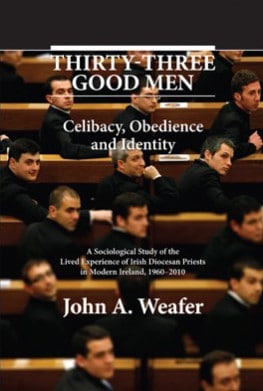 A new book by former seminarian Dr John Weafer has revealed that there is a strong gay scene among priests in the Irish Catholic Church, reports the Independent.

Thirty-Three Good Men: Celibacy, Obedience and Identity analyses priests' views on sexuality based on a series of interviews conducted by Weafer, who is now married with children.

One of the interviewees, identified as “Fr L”, reveals that it was only after he was ordained in the 1990s that he ended up having sex with another priest.

After "fumbling around" with another priest, Fr L "discovered a strong clerical gay scene in Ireland.” He added that there are "quite a lot of gay guys in the priesthood" and on one occasion he recognized at least nine priests when he visited a gay bar in Ireland.

According to Weafer, the church hierarchy in Ireland would not be shocked by such revelations because there is an awareness of what is going on. He claims that “as long as priests don't go public and don't flaunt those actions that don't correspond with being a celibate priest" the church turns a blind eye.

Ireland is expected to hold a referendum on same-sex marriage early next year.

Previous Post: « Gay UK Doctor Commits Suicide After Coming Out To Disapproving Mother Who Told Him to Get ‘Cured’
Next Post: 12-Year-Old California Boy Takes His Own Life After Facing Anti-gay Bullying for Being School Cheerleader: VIDEO »