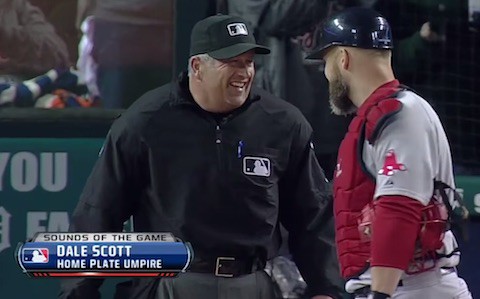 Dale Scott, a Major League Baseball umpire for the last 29 seasons, came out of the closet in the "quietest way possible" this month in an issue of the subscription-only Referee magazine, Outsports reports.

Astonishingly, Scott is "the first Major League Baseball umpire to publicly say he is gay while active (and the first out active male official in the NBA, NHL, NFL or MLB)." 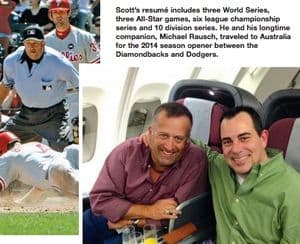 Scott's coming out was a photo of him and his partner of 28-years Michael Rausch aboard a plane traveling to the season opener between the Diamondbacks and the Dodgers, Outsports adds:

[Writer Peter] Jackel talked to friends of Scott's who grew up with him in Eugene, Ore., but nothing was written about his private life since he became an umpire. Prior to publication, the magazine's editor, Jeff Stern, wanted some non-game photos and that's when Scott made a decision to reveal a part of himself previously hidden from the public.

After consulting with his partner, Michael Rausch, Scott decided to send the photo below of the two of them…

"My thought process was," Scott told Outsports in his first interview on the subject, "is that there's a story about my career and how I got started in umpiring and they're talking to people I have known since junior high and it didn't seem right to have a whole story and pictures without a picture of Mike and I, someone who's been with me through this entire process. We met the October after my first year in the big leagues.

"Obviously, when I sent that picture to Jeff, I knew exactly what it meant. In a small way, this was opening that door in a publication that wasn't going to be circulated nationwide. It could be picked up, but it's not Time magazine. I made that decision to go ahead and do it because I felt it was the right thing to do.

Scott said the photo would not be a surprise to the MLB organization or the umpire staff and said he's not seeking attention for his story, though he may get it. The story is appearing on ESPN and other sports outlets.

Scott was able to add Rausch as his domestic partner in his contract with the umpire's union in 2010 (the two have been legally married since 2013) and says that people began offering his support after that, noting how baseball has changed:

"The first 10 years of my Major League umpire career, I would have been horrified if a story had come out that I was gay," he said. "But guys unprovoked started to approach me and say, 'I just want you to know that I would walk on the field with you any day, you're a great guy, a great umpire and I couldn't care less about your personal life.' Basically what they were saying without me provoking it was 'I know and I don't care.' That meant a lot to me because it surprised me since I had not brought it up. At first I was uncomfortable because I had spent my whole life hiding that fact from people even though I wasn't hiding it from myself or my friends."

Read the full piece here and the Referee article here.

Previous Post: « Anderson Cooper Has Emergency Appendectomy
Next Post: Adam Lambert Hits All The Right Notes Performing ‘Somebody To Love’ With Queen on ‘X Factor’: VIDEO »