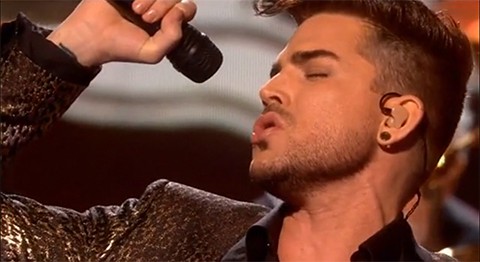 American Idol alumnus and current front-man for Queen Adam Lambert joined the legendary rock band for a performance of their hit, "Somebody to Love" on the U.K.'s X Factor Sunday night. Lambert has been touring and performing with the band since 2012, stepping into shoes once worn by the iconic Freddie Mercury, who no doubt inspired Lambert even before he joined up with Queen (they don't call him Glambert for nothing). Earlier, this year we shared Lambert's performance of "Somebody to Love" that traded heavily in Mercury's iconography. As NewNowNext points out, last night's performance saw Lambert and bandmates don AIDS memorial ribbons, touching additions that were perfectly poignant given that yesterday was World AIDS Day. Mercury passed away in 1991 from AIDS related causes.

Watch Lambert's rousing rendition of the Queen classic (don't miss his final belts!), AFTER THE JUMP…