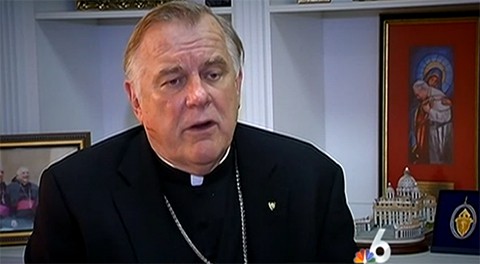 Following the overhaul of Florida’s ban on same-sex marriage, Archbishop of Miami Thomas Wenski issued a letter (below) to employees of the archdiocese warning that any conduct or behavior “inconsistent with the teachings of the Catholic Church”, in other words, in support of same-sex marriage, could result in termination. NBC News reports:

The letter, from Archbishop Thomas Wenski, told employees that “because of the Church’s particular function in society, certain conduct, inconsistent with the teachings of the Catholic Church, could lead to disciplinary action, including termination, even if it occurs outside the normal working day and outside the strict confines of work performed by the employee for the Archdiocese.”

Wenski’s letter also warned employees that the conduct requirements also extend to the Internet. “Employees should exercise discretion when posting on social media sites, and note that online activity indicative of prohibitive behaviors may subject an employee to disciplinary action or termination,” it read.

Earlier, Florida’s Catholic Bishops came out against the arrival of same-sex marriage in the Sunshine State, claiming same-sex marriage “threatens both religious liberty and the freedom of individuals to conscientiously object.”

Late last year Pope Francis was thought to have been sending mixed messages about whether he and the Catholic Church would reconsider their stance on same-sex marriage. However, following media speculation, the Pope was quick to make a statement clarifying that same-sex marriage was not on the table for discussion.

Watch a news report on the letter from the Miami Archdiocese, AFTER THE JUMP… 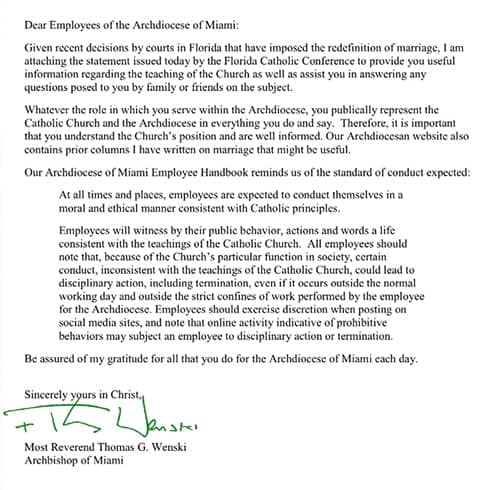