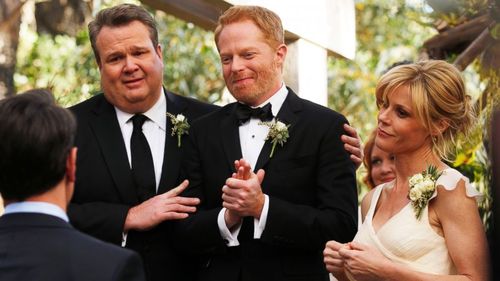 In a new video for BBC News, Tom Brook reports on the ubiquity of gay characters in American TV shows and the effect these characters have worldwide.

The short video segment profiles two men: one with a more optimistic outlook on the issue, and one who is more pessimistic.

The former is activist Omar Sharif Jr.,  who spent his youth in Egypt. He didn't know any gay people growing up, but he was familiar with characters like Jack from "Will and Grace." Said Sharif:

By seeing these characters on TV, youth across the world — myself included — learned that we weren't alone, that different isn't bad. That there's a community out there (even if it's across vast oceans sometimes) that supports them and loves them for who they are.

Russian-born pianist and journalist Oleg Dusaev has a different take. He now lives in New York, but he has experienced homophobia in Russia. Dusaev says he once "had hope these shows and films could change society in a more tolerant way."

Unfortunately, he worries that shows like "Modern Family" could make people "resistant" to new attitudes; he believes homophobic people "hate gays" point blank, and that these shows "could increase the hatred."

Sharif makes a similar point, noting that gay characters are sometimes used "as a tool to propagate hate," but that in terms of net effect, these shows are doing much more good than bad to change the cultural tenor.

Head to BBC, or check the video out embedded AFTER THE JUMP…