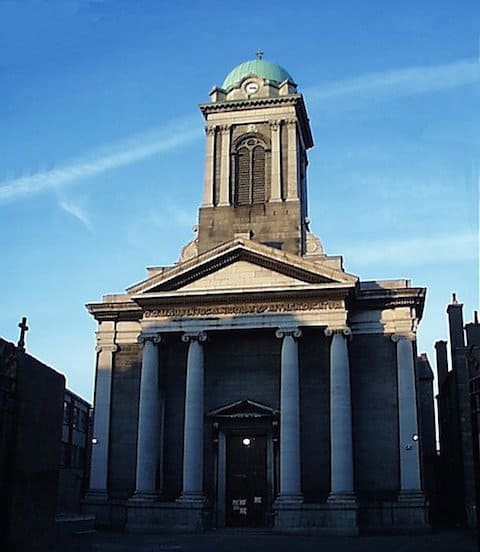 An Irish priest received a standing ovation from parishioners last weekend when he came out during mass and called for marriage equality, reports Irish Central.

Father Martin Dolan (right) is the only parish priest at the Church of St Nicholas of Myra (above) in Dublin city center.

Calling for a yes vote in a referendum on same-sex marriage this coming May, Dolan said “I’m gay myself” and was met by applause and a standing ovation from his “proud” parishioners.

A priest recieved a standing ovation from churchgoers when he came out as gay at the pulpit http://t.co/UejSzfyfOC pic.twitter.com/bX2uYe4oMe

A source within the church said:

“It was very brave. He said he was gay. That was it…no bones about it.”

With Dolan currently on a pre-planned vacation, the source added:

“[He] was just doing his service, it was part of his homily, and that’s it. If he feels strongly about something, Martin just says it.

“He’s happy with himself. There is no fear of him running away, he wouldn’t be one of them people.

“There’s a lot of gay priests but nobody will actually get up and say it.”

“I wouldn’t like to see him being moved for the statement he made. That would be horrendous. He should be supported. He has done nothing wrong. If he’s moved, there would be uproar in this parish. He’s still the same man today.

“Fr Martin has always been an advocate of people’s rights, and even spoke about the child abuse in the Church.

“There’s not many [priests] that would come out because they’re afraid of the bishops and that, but Martin is his own man. That’s what he believes in.”

The Dublin Archdiocese has declined to comment until officials have spoken with Dolan.

However, the Catholic Church in Ireland has made it clear that ita anti-gay, anti-equality policies remain unchanged. Last month, the church started off what is expected to be a highly charged campaign with a manifesto detailing why they hate gay people. Bishop of Elphin Kevin Doran said that his opposition to same-sex marriage is “not about homosexuality or the gay lifestyle, it is about the meaning of marriage."

Although the government supports the referendum, which is expected to pass, there have been many warnings against complacency.

Last month, we reported that a new book by former seminarian Dr John Weafer revealed that there is a strong gay scene among priests in the Irish Catholic Church.