On today's Focal Point radio program, Bryan Fischer devoted a portion of his opening segment to addressing last night's reports that he'd been fired from his position as spokesman and director of issues analysis for the American Family Association. 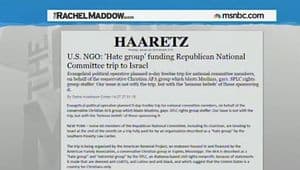 I think I've been on-air somewhere between 2,700 and 3,000 hours. Now if you talk for a solid 3,000 hours, there's probably going to be some things you're going to say somewhere along the way that maybe you thought 'Well that was pretty strong, when I said that. Maybe if I was to do that over again I might use a little bit different language.' That happens to all of us. Anyway the low-information media taking some of the things that I have said and made the false assumption that I was representing the official views of the American Family Association, which I was not. We've got that disclaimer at the end of every broadcast, at the bottom of every blog post we submit – that the one who is speaking or writing here does not necessarily reflect the views of the American Family Association, but the low-information media seem to have trouble making that distinction so we're going to help them clear up that confusion. So I've taken off my hat as spokesman for AFA and will continue to be your loyal, humble, and cheerful host of Focal Point.

Rachel Maddow broke the story last night, reporting that Fischer's firing was due to Israeli press reporting that Reince Preibus and the RNC are taking a trip to Israel which is being funded by the AFA.

Right Wing Watch, meanwhile, had this to say on Fischer's firing:

…the AFA has literally accomplished nothing with this stunt and has completely failed to distance itself from Fischer's utterly despicable views. The primary venues though which Fischer has managed to spread his bigotry for the last six years have always been owned, operated, and funded by the American Family Association and that relationship appears to remain intact.

Stripping Fischer of his title as AFA spokesman in no way alleviates the AFA of its responsibility for Fischer's toxic views given that the only reason Fischer even has a platform from which to spread those views is because AFA is providing it to him and paying him to spread them!

From the very start of Fischer's time at AFA, the organization has pathetically attempted to have it both ways: providing the very microphone from which Fischer speaks while simultaneously claiming that it bears no responsibility for the message that he sends.

The AFA latest effort to rid itself of Fischer's rancid reputation is little more than a rhetorical accounting trick aimed at creating the false impression that the organization has wiped Fischer's bigotry off of its books.