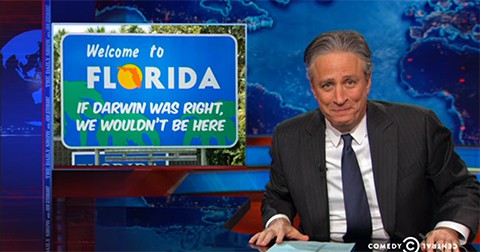 On last night's The Daily Show, host Jon Stewart took the state of Florida to task for the extreme measures it took this month to avoid granting same-sex couples the right to marry. Among the many absurdities involved in the larger unfolding of events pertaining to the arrival of marriage equality in Florida, Stewart highlighted the decision by some counties not to allow any couples to get married at courthouses, a move aimed at blocking same-sex couples from saying "I do" and upholding the so-called "religious liberty" of clerks who personally oppose marriage equality. The fodder is too perfect for Stewart to resist:

"Yes we don’t want to cause 'discriminations' against county court employees who don’t feel like following the law. These people didn’t choose to be county clerks. They were born that way."

Florida claiming to have the moral high-ground on any subject is a bit of joke. Stewart sums it up nicely: "Florida, you don’t get to judge others when your state motto is, 'If Darwin was right we wouldn’t be here.'”

Previous Post: « Matthew Dempsey Demystifies The Za Za Zoo And Why We Love Who We Do – VIDEO
Next Post: New Diversity Initiative From British Channel 4 Tackles Need For LGBT Minority Representation In Television »