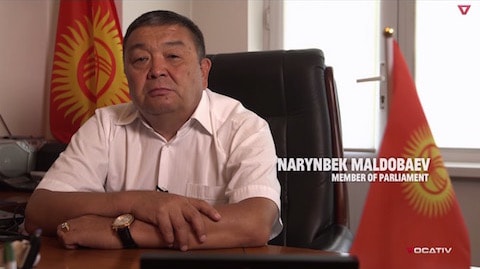 Kyrgyzstan, a small central Asian nation just east of Uzbekistan and north of Afghanistan, is a relatively newly independent nation, just 25 years out of being a part of the Soviet republic. With this new independence, there are two primary forces fighting for control, neither of which is desirable, and both of which are extremely anti-gay: Russian President Vladimir Putin and radical Islam.

A 26-minute film by Vocativ covers a broad swath of the issues facing the nation, including the nation's attitude towards gays and lesbians. There is resistance to the "Western idea" of accepting people for who they are, and MP Narynbek Maldobaev went so far as to call for an extermination, saying:

If it were up to me, I would round them up, the despicable criminals. I'd bring them to a public square and there I would publicly punish them.

When the interviewer asked for clarification on whether "punish" meant execute, Madobaev responded in the affirmative, saying that it would be, "In order to cleanse society." Rather than attempt genocide, the Kyrgyzstan government will be voting on a Russia-like anti gay propaganda bill and it looks like it's enactment will be just as oppressive and even more brutal.

You can watch the documentary, and fast-forward to 1:30 for the statements by Madobaev, AFTER THE JUMP…