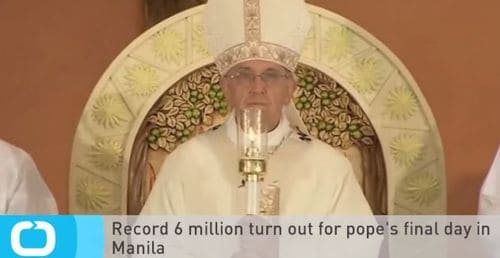 Closing out his four day trip to the Philippines with an outdoor homily in Manila earlier today, Pope Francis railed against "insidious attacks" against the family in a thinly veiled reference to gay rights, the AP reports:

Pope Francis denounced Monday what he calls the "ideological colonization" of families and the developing world, where he says progressive, Western ideas about birth control and gay rights are increasingly being imposed by groups, institutions or individual nations — often as a condition for development aid.

Francis said Catholics don't have to "be like rabbits" and have more children than is safe or responsible. He said there are plenty of church-approved ways to regulate births. But he said most importantly, no outside institution should impose its views on families. […]

During the Vatican's recent meeting on the family, African bishops denounced how aid groups and lending institutions often condition their assistance on a country's compliance with their ideals: allowing health care workers to distribute condoms, or withdrawing assistance if legislation discriminating against gays is passed.

"When imposed conditions come from imperial colonizers, they search to make people lose their own identity and make a sameness," he said. "This is ideological colonization."

Earlier in his trip, Pope Francis had warned gay marriage threatened to make the family "disposable."

A record 6 million people were believed to have gathered on the streets of Manila to hear the pope's speech today. Watch footage of the cheering crowd, AFTER THE JUMP…

In related news, Pope Francis is planning to address a joint session of Congress and visit the White House during a trip to D.C. this September.