Three House Republicans have now signed on to the Respect for Marriage Act, a bill introduced again last month that would fully repeal the Defense of Marriage Act, HuffPost reports: 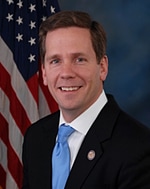 Rep. Robert Dold (R-Ill.) on Monday became the third Republican to sign on to the bill, called the Respect for Marriage Act. Freedom to Marry, a campaign focused on ending federal marriage discrimination, announced the news.

A portion of DOMA has already been struck down by the U.S. Supreme Court in the Edie Windsor ruling last year.

The bill has 126 co-sponsors. Other Republicans who have signed on are Rep. Ileana Ros-Lehtinen (R-FL) and Rep. Richard Hanna (R-NY).