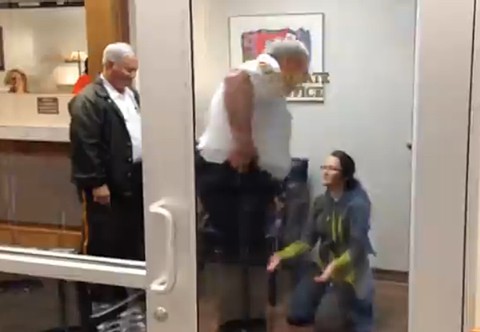 Anne Susan Diprizio, an Alabama minister has been arrested after she offered to marry a gay couple inside the Autauga County probate judge’s office, the Montgomery Advertiser reports:

“Judge Booth said there was a lady in the office who wouldn’t leave when he asked her to leave,” Hill said.

Deputies asked Diprizio to leave several times, but she refused. Capt. Tom Allen told her she was either going to leave the office or be arrested, she got up from the chair she was sitting in and kneeled in the floor. Allen handcuffed her and led her across the street to the Autauga Metro Jail.

The Autauga County Probate Office stopped performing all marriage ceremonies on Friday. Booth then said the decision to stop performing the ceremonies was related to work flow, not a recent federal court order lifting the state’s ban on same sex marriages.

Watch the Advertiser’s report, AFTER THE JUMP

Previous Post: « David Axelrod: I Advised Obama to Lie About Opposition to Gay Marriage to Get Elected
Next Post: 3 Years After Mayor Refused To Sign Marriage Pledge, Dallas Drags Feet On Equal Benefits For Gay Employees »