How To Get Away With Murder actor Jack Falahee tells Vulture that he’s tired of people asking if he’s gay:

“People have been asking me about my sexuality ever since that OUT interview. I’m very confident in my sexuality, and I really don’t like talking about my romantic life in the press. It’s pretty reductive to ask just the actor playing the gay character what his sexuality is if you’re not going to ask that question of people playing straight characters on the show. I really don’t see what my sexuality has to do with the characters, and I think that’s private. But I find it interesting, the fascination with picking apart or outing actors who play homosexual characters on TV or in films. We don’t have that same fascination with actors who are portraying heterosexual characters.” 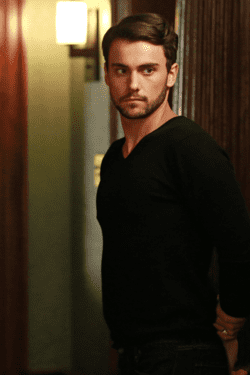 Falahee expanded on that answer this week in an interview with  Michelangelo Signorile on SiriusXM Progress:

“I was basically trying to say [in the OUT interview], for me it’s like asking an actor who plays an alcoholic what their relationship is with alcohol. It’s not necessarily — I think we’re projecting onto actors in a way. I think we’re expecting them to be their characters when, at the end of the day, this is my job and I’m an actor portraying a role on a fictitious television show.”

Signorile then asked Falahee if it’s not fair to ask an actor what they personally bring to the experience of playing a character.

Falahee says that’s a very different question than “How do I define my sexuality,” adding that he thought he got a great question from an interviewer down in Atlanta who asked, ‘What personal experience do you bring to portray — what did she say? — a ‘manwhore’ homosexual on television?’

“That is a different question than how do I define my sexuality. And to answer that question, I would say, well, you know, I went to NYU, and the Tisch School of Drama, and there we studied Stanislavski-based acting techniques. And while I have dabbled in the Lee Strasberg method of sense-memory and using your own experience to portray a character, I found that that was a fast track, maybe, to therapy. And so, I fell more into the Stella Adler method of acting camp, and create fictitious circumstances….I’m creating circumstances in which Conor exists to accurately portray him..I just think it’s interesting because I have a body of work before Conor Walsh that is primarily heterosexual and yet people want to ask — you know, no on asks any other man, or woman, on my show, about their sexuality, and that’s what fascinates me…We don’t ask the actor playing James Bond what his sexual preference is. So I don’t know what it is, really, with trying to out actors who portray gay characters on television. But it is some sort of fascination in society.”

Here’s the excerpt from the February OUT interview to which Falahee refers at the beginning of this post:

“I don’t think answering who I’m sleeping with accomplishes anything other than quenching the thirst of curiosity. And moreover, it seems reductive. It’s been really interesting to be in the middle of the industry’s fascination with the individual, because I never thought about that growing up or when I was at acting school. No matter how I answer, someone will say, ‘No, that’s not true.’”

I’m the first journalist to straight-out ask, he says, “but everyone wants to.” We spend a good 10 minutes debating why it might matter to any of us how he answers, or why he won’t. “We still live in this hetero-normative, patriarchal society that is intent on placing everything within these binaries,” he says. “I really hope that — if not in my lifetime, my children’s lifetime — this won’t be a question, that we won’t need this.”

Watch a scene from the latest episode (the finale) in which Oliver and Connor discuss HIV and head to a clinic to get tested (spoilers), AFTER THE JUMP…

Previous Post: « Travel Notes from All Over: News for the Global Gay Jetsetter
Next Post: Get Ready for the Return of Dragons With This ‘Game of Thrones’ Season 5 Poster and Teasers: VIDEO »