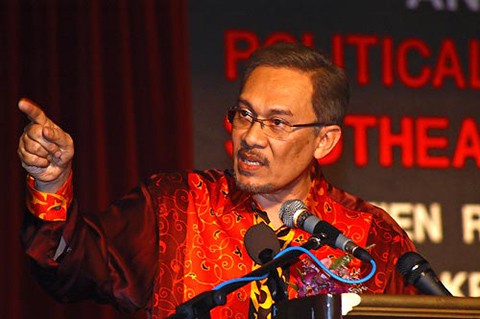 Despite some uplifting advances within the trans rights space, Malaysia still remains pretty solidly on the "Countries Hostile to LGBT Citizens" list. This is highlighted by the legal trials and tribulations former Malaysian Deputy Prime Minister Anwar Ibrahim, an outspoken opposition leader in Malaysia, has endured over allegations that he is gay and had sex with a male aide.

This story goes way back. In 1998 Ibrahim was jailed on corruption and sodomy charges and served six years in jail, at which point the conviction was overturned. A defamation case was launched in 2006 when former premier Mahathir Mohamad said that Ibrahim could not have been allowed to become prime minister because he was gay. The case was eventually thrown out on a technicality. In 2008 authorities accused Ibrahim of having sex with an aide in his opposition party, an accusation he was acquitted of in 2012 but was subsequently charged again two weeks after the acquittal. Last March the acquittal was overturned and Ibrahim was sentenced to five years in prison.

All of which brings us to today, when Malaysia's highest court has decided to uphold the overturn of the acquittal. Ibrahim maintains his innocence, claiming,

This to me is a fabrication coming from a political conspiracy to stop my political career.

Given the vast amount of attention the courts have paid to an individual's private sex life, it's a plausible assertion. Bernadette Meehan, a spokesperson for the National Security Council, also lodged criticism at the Malaysian courts:

The decision to prosecute Mr. Anwar and the conduct of his trial have raised a number of serious concerns about rule of law and the fairness of the judicial system in Malaysia.

Concerns about rule of law and fairness of the judicial system really should have been brought to light when the Malaysian government decided to officially state that muscular boys in sleeveless shirts and girls having sleepovers were signs of "the gay".

Watch a news report from Reuters on Ibrahim's conviction, AFTER THE JUMP…