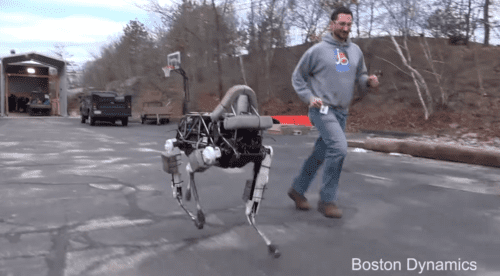 Do you remember BigDog, Boston Dynamics’s terrifying (but also cool) quadruped robot designed to assist soldiers through unfavorably rough terrain? Of course you do; it’s been haunting your nightmares of the robot uprising. Never one to leave well enough alone, the Google-funded company is back with a smaller, more nimble version of its canine-like robot they’re calling Spot.

Spot, like its larger relatives, moves around using a system of four articulated legs, an on-board computer, and an array of sensors that allow the machine to adapt to its surroundings much in the same way that an actual animal would.

As uncanny as it is to watch Spot dressage-trot its way through Boston Dynamics HQ, it’s difficult not to be impressed at the moments in which its behavior very closely resembles that of a living animal.

As Neel Patel explains in Wired, much of the life-like behavior showcased in the video is a natural outgrowth of Spot’s programming that’s designed to allow it to respond to external stimulus. In those moments where the two Spot units bump into one another, the machines attempt to correct the collision by orienting themselves in relation to one another. Programmatically, Spot’s making sure to move unencumbered. Visually, however, it looks like they’re purposefully trying to move together.

If the Matrix has taught us anything it’s that we should all consider investing in handheld electromagnetic pulse devices.