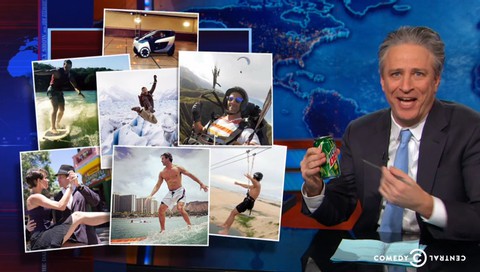 This week we reported on the continuing travails of Aaron Schock, whose Downton Abbey-inspired office set in motion a series of inquiries about his mishandling of funds.

Not only has his interior decoration money trail been questioned, and certain suspicious real estate deals, but this week the AP uncovered a string of questionable travel expenses by using the Congressman's Instagram photos to pinpoint when and how he arrived at the exotic destinations he flaunts on his social media account.

Schock this week lawyered up to defend himself, but his most well-known response to all the digging up till now has been to quote Taylor Swift, telling an ABC News reporter, "Haters are gonna hate."

And Schock last night finally got the Daily Show treatment he deserved.