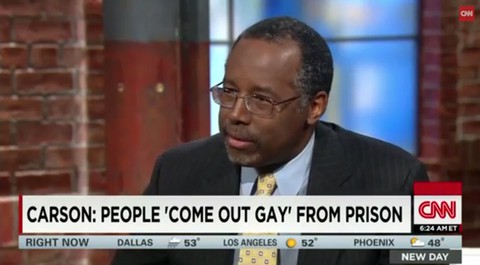 Republican presidential hopeful and anti-gay extremist Ben Carson sat down with CNN's Chris Cuomo this morning for a discussion about same-sex marriage and explained why he believes homosexuality is a choice:

"Because a lot of people who go into prison go into prison straight — and when they come out, they're gay. So, did something happen while they were in there? Ask yourself that question."

Cuomo: "Most gay people never go to prison and you know there's a whole theory of dominance."

Carson: "I said a lot of people who go in, come out…are you denying that that's true?"

Carson: "If that is the case then it obviously thwarts what you just said."

Watch the rest of the conversation, AFTER THE JUMP…