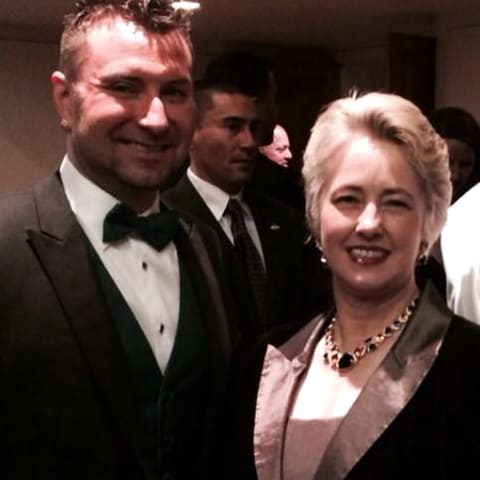 Between events like this one and this one, Houston has seen its share of anti-LGBT hatred in recent months. So it's hardly surprising to see some of that hatred filtering down onto the streets.

In fact, Houston has experienced a rash of anti-LGBT hate crimes of late. And amid all the rhetoric from opponents of the city's Equal Rights Ordinance, is anyone really surprised?

In the latest incident, Houston gay activist John Gaspari (shown above with Mayor Annise Parker) is recovering after being shot in the stomach in an apparent hate crime in the city's Montrose gayborhood, Project Q Houston reports:

A gay Houston man was beaten, shot, robbed and called an anti-gay slur as he was attacked by three men while walking home from a Montrose gay bar.

John Gaspari was attacked near the intersection of Genesee and Cleveland – less than a half-mile from Meteor – as he walked from the bar about 3:30 a.m. on Feb. 15, according to KHOU and About Magazine. The robbers took his wallet, jewelry and cell phone, beat him and shot him in the stomach. Gaspari said the assailants yelled, "Get the fag."

"I'm just really grateful to be alive," said Gaspari, who spent nearly 2 weeks in the hospital. "My last memory was of them tackling me." …

"I probably won't walk down the street alone anymore, I will wait for an Uber or drive," he says.

According to About Magazine, a witness called police and reported Gaspari lying on the ground as the three suspects kicked him. The witness was able to get the license number from the suspects' vehicle, which turned out to be stolen. Not surprisingly, police insist the incident was a random robbery, not a hate crime.

Gaspari had recently lost his job, and supporters launched an Indiegogo fundraiser to help with expenses during his recovery, which could last 6-8 months. The fundraiser, which expired last week, raised $3,446:

John has been so generous with his time and his money since moving to Houston several years ago. He has supported so many LGBT causes, organizations and events. Now its time for our community to rally in support of John.

As many of you know, John has had a string of bad luck since moving here. He faced constant gay-oriented discrimination and harassment at this job. And the Friday before the attack, he was laid off. But through it all, John has kept his sweet good humor and has been such an asset to our community.

It's been 24 years since gay banker Paul Broussard was murdered on the streets of Houston, in one of the earliest and most notorious anti-gay hate crimes in US history. When will it end?