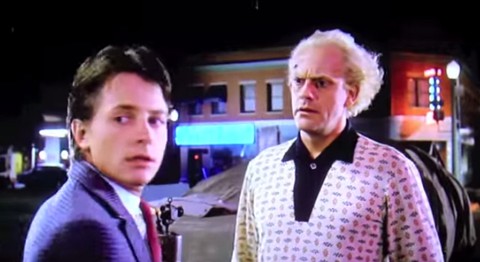 Can a break in the space time continuum alter your sexuality? Apparently, Marty McFly worried that it might.

In a deleted scene from the seminal Back To The Future, Marty McFly (Michael J. Fox) talks to Doc Brown (Christopher Lloyd) about how uncomfortable he is with a plan the two devised wherein Marty is supposed to put the moves on his mom, setting off a chain of events that would, eventually, get Marty back to 1985 (the year he was from). But hitting on your mom is weird, Oedipal business. Which somehow led Marty to think the incident could be so traumatic that it could make him gay: “I can’t believe I’m going to feel up my own mother,” Marty complains. “This is the kind of thing that could screw me up permanently. What if I go back to the future and I end up being… gay?” It being the 1950s and "gay" not yet becoming synonymous with "homosexual," Doc Brown responds, "Why shouldn't you be happy?"

The brief exchange fits in with the style of jokes throughout the film that highlight the difference between life in America in 1955 versus 1985. In another scene, for instance, Doc Brown laughs at Marty when he says that Ronald Reagan is the President of the United States in 1985: "Ronald Reagan?! The actor?! And who's Vice President, Jerry Lewis?" But the reason why this "gay" joke is different is that it suggests that someone or something can make you gay. And ultimately, that may have been the reason why it was left on the cutting room floor.

Watch the scene for yourself, AFTER THE JUMP…