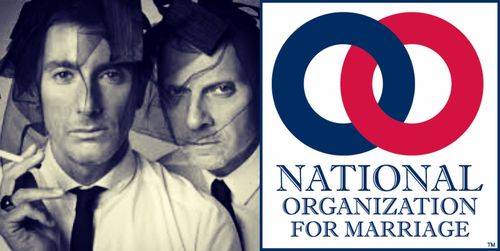 You know you really might want to rethink your views when the Roy Moore-loving, pro-discrimination, morally (and literally) bankrupt National Organization for Marriage lines up behind you in support.

Gay designers Domenico Dolce and Stefano Gabbana, who are currently facing a resurgence of bad PR after they indicated in an interview that "the only family is the traditional one" and that children born through in vitro fertilization were "synthetic," are getting the red carpet treatment over at the NOM blog:

While Dolce and Gabbana continue to be attacked as “hypocrites”, what their critics have failed to do is prove them wrong. Every child is born to and deserves to be raised by a committed, married father and mother, and same-sex marriage will always strip away at least one essential piece of the family.

Bravo to Dolce and Gabbana for daring to speak the truth; they are as bold in their speech as they are in their designs, and deserve to be applauded. While others will continue to vent their disagreement, the billionaire pair are wonderful advocates for the true definitions of marriage and family.

MSNBC reports that Gabbana, meanwhile, has fired back at Elton John for popularizing the #BoycottDolceGabbana campaign: 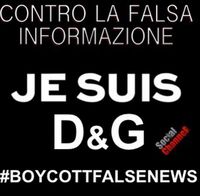 Stefano Gabbana posted dozens of photos and comments on social media, at one point calling John a “fascist” for “an authoritarian way seeing things: If you don’t agree with me, I will attack you.” The designer also posting an image that borrows from the “Je Suis Charlie” movement, saying Je Suis D&G and #boycottfalsenews. Some of the messages posted include #boycottEltonJohn.

“This online campaigning is useless. A gay rights group put words in our mouths in bad faith, and it got out of control,” Gabbana told Italian newspaper Corriere della Sera on Tuesday. “We don’t and won’t boycott anyone.”

He added in a statement provided to NBC News: “We firmly believe in democracy and the fundamental principle of freedom of expression that upholds it. We talked about our way of seeing reality, but it was never our intention to judge other people’s choices. We do believe in freedom and love.”

NOM, Piers Morgan, and Dolce and Gabbana…how's that for "non-traditional" bedfellows?