Over the show’s two seasons its writers have repeatedly used the Gems ability to fuse with one another to explore the intricacies of physical and emotional identities. In a lighthearted episode entitled “Alone Together” Steven, who is half Gem, accidentally fuses with his female friend Connie and becomes a physically androgynous being whose sole focus is to find a banging dance party. Though Stevonnie presents physically as being predominantly female, the character’s gender is left undefined and Stevonnie the person is uniformly admired by everyone that they meet.

During this season’s past few story arcs “Steven Universe” has hammered home its usually subtle messages about accepting love in all forms in much more explicit ways. In this week season finale’s “Jail Break” we learn that Garnet, voiced flawlessly by Estelle, is actually a near permanent fusion of two separate Gems with a deep romantic love for one another. The significance of the plot twist may seem minor, but as Mey Valdivia Rude writes for Autostraddle messages like Garnet’s can be powerful for young audiences: 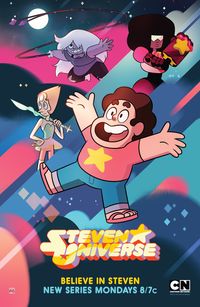 “Representation is vitally important for children. Study after study and expert after expert says that when kids see people like them positively portrayed in the media they consume, they are positively impacted, and when they don’t see that same representation, it negatively affects not only them, but how others view and treat people like them.

Especially when we’re still developing, and especially when we are still discovering and exploring our genders and sexuality, it’s important for us to know that we’re not alone and that we have the possibility of a bright future. One way to do this is by creating fictional characters and narratives that show that bright future for people like that.”

Previous Post: « Tim Cook Offered Dying Steve Jobs His Own Liver According To New Biography
Next Post: Ellen and Michelle Obama’s ‘Uptown Funk’ Dance Spectacular Is As Epic As It Sounds: VIDEO »