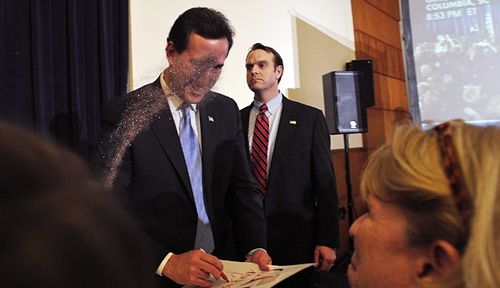 The Texas Department of Public Safety is warning legislators about the threat of gay-rights glitter bombs after one was allegedly mailed to an anti-LGBT state representative.

According to The Texas Tribune, a DPS captain sent an email to legislative staffers on Thursday with an attachment titled, "Glitter Bombing: Weapon of Choice for Gay Rights, Pro Choice Advocates."

According to the DPS email, passed along to Senate chiefs of staff by Patsy Spaw, the secretary of the Senate, state Rep. Debbie Riddle's district office in Spring recently received such a parcel — a spring-loaded tube filled with glitter.

"Glitter bombing is a relatively recent phenomenon and has been adopted as a form of protest, particularly (but not exclusively) by gay rights activists and supporters," the document attached to the email reads. It goes on to list several prominent politicians who were glitter bombed, and says, "The common denominator among these political figures is a conservative orientation and opposition to gay rights, especially marriage equality." …

Chuck Smith, executive director of the gay rights group Equality Texas, declined to comment on the email attachment but said his group makes its case with "face-to-face conversations with lawmakers, by showing the real harm to real Texans caused by unequal laws – not by childish pranks."

Rep. Riddle, the alleged recipient of the glitter bomb, is the author of a bill that would make it a crime for transgender people to use public restrooms according to their gender identity.

More from the Texas DPS warning:

The glitter bombing of public officials rose to prominence in 2011, when Newt Gingrich, Tim Pawlenty, Michele Bachmann, Karl Rove and Erik Paulson were all similarly glitter bombed. The common denominator among these political figures is a conservative orientation and opposition to gay rights, especially marriage equality. Recipients in 2012 included Rick Santorum (on four separate occasions), Mitt Romney and Ron Paul. Mitt Romney’s bomber, a University of Colorado student, faced up to six months in jail and a fine of $1000. Glitter bombing was featured in the Season 3 premiere of Glee on September 20, 2011. ….

Glitter bombing, which releases a “blizzard of glitter” (according to the media coverage of Rick Santorum’s bombing in February 2012), may pose a health hazard to the recipient in the form of glitter particles entering the eyes, nose, lungs or other soft tissue, which may result in irritation or infection.

The attachment also contains a link to a video showing what it's like to be victimized by a mail-tube glitter bomb.

Watch the video and read the full DPS attachment, AFTER THE JUMP …