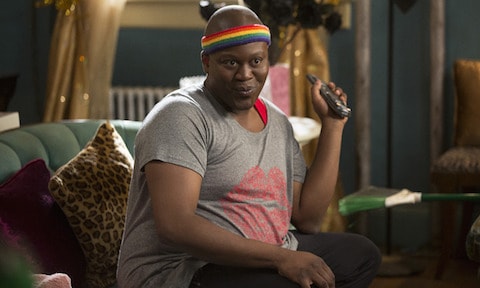 — We’ve already recommended hunkering down for a marathon viewing of Netflix’s The Unbreakable Kimmy Schmidt, but the new comedy is so charming, it’s worth repeating. The series, written and created by Tina Fey & Robert Carlock, is laugh-out loud funny and features one of our favorite new characters, Titus Andromedon, played to perfection by the multi-talented Tituss Burgess.

More series bid this season adieu, AFTER THE JUMP …

— Whether you know him from his work on Gavin & Stacey, his Tony Award-winning turn in One Man, Two Guvnors, or as the baker in the film adaptation of Into the Woods, get ready to see a lot more of James Corden. Beginning last night, he took over the desk from Craig Ferguson on The Late Late Show at 12:35 a.m. Eastern on CBS.

— There’s a reason GLAAD gave ABC Family an Excellent rating in their report of LGBT characters on TV. The youth-oriented network features several shows with prominent LGBT characters, including two wrapping their seasons this week and one make its debut. There’s plenty of drama in store for the second season finale of The Fosters Monday at 8 p.m. Eastern. Then, on Tuesday at 8 p.m. Eastern, the soapy teen thriller Pretty Little Liars peels back another layer of A’s twists in the show’s season finale. If you’re worried about saying goodbye to those two series, you’re in luck. Fire up your DVR for the second season of Young & Hungry, featuring performances from Kym Whitley and Alec Mapa. It kicks off Wednesday at 8 p.m. Eastern.

— Big Freedia’s got some issues to twerk out when a trip to Hawaii is rife with problems, on stage and off. How will the Queen of Bounce bounce back? Find out 11 p.m. Eastern Wednesday on Fuse.