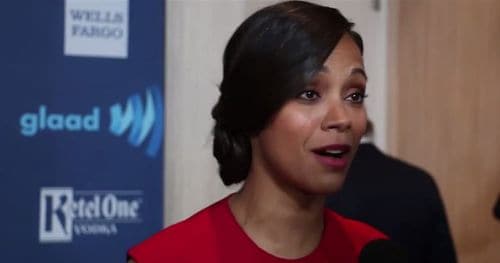 Actress Zoe Saldana is the latest celebrity to weigh in on Domenico Dolce and Stefano Gabbana’s “synthetic children” and gay adoption remarks and despite vocal outcry from multiple celebrities against the designers, Saldana voiced her support for them, saying she won’t stop wearing Dolce & Gabbana reports E! Online. Saldana said that changing her fashion choices because of the fashion duo’s unpopular opinions would be the "stupidest thing."

"No! Not at all, that would be the stupidest thing if it affected my fashion choice…People are allowed to their own opinion, however, I wouldn't have chosen to be so public about something that's such a personal thing. I’m certainly not going to stop wearing Dolce, and I'm certainly not going to be refuting when they are adopting synthetic children, however they wanted to say it. I do think things are lost in translation…

"My husband (Marco Perego) is from Italy and if I judged him based on the words that he misuses in our English language he wouldn't be here today. It's like ‘Look people, have a drink, relax, it's okay.’ Obviously it caused some sensitivity, but then again if you continue to follow the news, you see they all kinda hugged it out, so why are we making a big deal about it?"

Watch Saldana weigh in on the D&G controversy at the GLAAD Media Awards red carpet this weekend, AFTER THE JUMP…

"You are born to be a mother and a father. Or at least that's how it should be. I call children of chemistry, synthetic children. Rented wombs, semen chosen from a catalog."

Dolce and Gabbana have since backpedaled on their original statements and choice of words, with Gabbana stating "It was never our intention to judge other people’s choices. We do believe in freedom and love." Dolce mirrored Gabbana’s statement saying "I was talking about my personal view, without judging other people’s choices and decisions." Despite the vocal backlash from LGBT supporters, Dolce and Gabbana have since received support, whether they want it or not, from the National Organization for Marriage who called the designers "wonderful advocates for the true definitions of marriage and family."