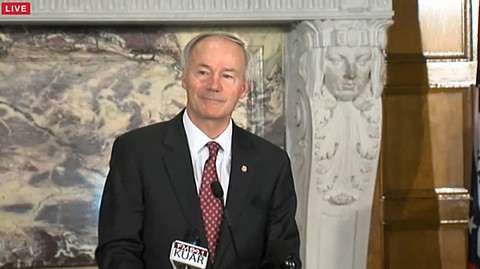 Arkansas Governor Asa Hutchinson is requesting that the state legislature recall #HB1228, the "religious liberty" bill and make changes to make the bill mirror more closely the 1993 federal 'religious freedom' laws. He says he won't sign it in its current form.

Said Hutchinson: "My position is clear: I've asked them to remedy it, change current law, recall it, change language on it."

He does not have a commitment from the legislature on what action it will take.

Hutchinson also discussed the possibility of an executive order to ensure the bill does not allow discrimination.

"We want to be known as a state that does not discriminate, but understands tolerance."

"This is a bill that in ordinary times would not be controversial. these are not ordinary times," Hutchinson said, saying there is a generation gap in opinions on the issue, adding that his son told him to veto the bill.

"My son Seth, signed the petition asking me, Dad, the governor, to veto this bill."

Watch the full press conference, AFTER THE JUMP…