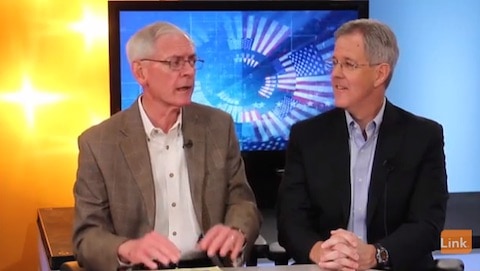 Anti-gay activist group Focus on the Family (FotF) is getting its knickers in a twist over the backlash against Indiana’s Religious Freedom Restoration Act (RFRA).

Speaking on FotF mouthpiece CitizenLink, President Tom Minnery (above left) attempted to explain what can be learned from recent events in Indiana.

Minnery explained that the government u-turn to make the law “less efficacious because of the impact from the business community” was “driven by the secular left.”

He helpfully tells us that the #RFRA is not actually discriminatory but allows Christians to “show up in court” to defend their actions – in other words to discriminate and then argue why they should be allowed to. He also voices concern that the law may be unfair to grandmothers.

He continues that Christians in other states considering RFRA laws are on a “battlefield” and should “help potential opponents to understand what the law does, what it doesn’t do…before the newscasts start misinterpreting the law as it did in Indiana.”

He concludes that Christians who oppose marriage equality are in for a difficult time when the Supreme Court makes its decision in June but warns LGBT activists that they face the wrath of faith-based discrimination when they find out “how much our Christian faith really means to us when its tested.”

And in a audio clip from Right Wing Watch, FotF founder James Dobson warns that a Supreme Court ruling in favor of marriage equality could lead to a full-blown civil war.

Both clips, AFTER THE JUMP…