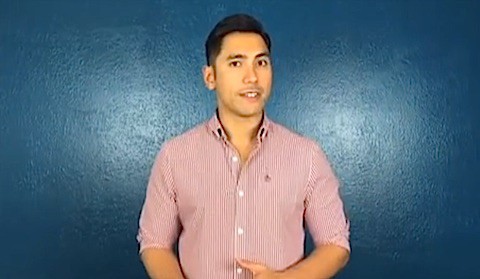 “My name is David Cruz and I am a current cast member of Bravo TV's ‘The Millionaire Matchmaker.’ I spend a good part of my life setting people up and helping people find love. “But, recently something has come my way that has broken my heart.

"Last week I was saddened to hear that the Governor of Guam, the island where I grew up, is denying gay men and women their legal right to marry – EVEN after being issued a legal memorandum to do so from the Attorney General of Guam.

“I was compelled to voice my opinion about this matter as I am not only a son of Guam having grown up on the island, but also as a gay man. I spend every moment of my life helping people find love and giving advice about relationships, so I cannot stand by and watch my own community of LGBT people be discriminated against.”

thank you for this @DavidCruzTMM . i adore you, applaud you and support you. #guamequalitynow https://t.co/4VZEYFeSu8

Watch Cruz’s video in support of same-sex marriage in Guam, AFTER THE JUMP…

Yesterday we reported that Anthony Apuron, the Archbishop of Guam, described being gay as an “intrinsically moral evil” and insisted that the only way to deal with homosexuality is to think of it as a disorder to be treated.

(WOW! This is crazy!) The Archbishop of Guam says homosexuality is a "Disorder" – http://t.co/EQOyThX7Yl