As Louisiana governor Bobby Jindal digs in his heels in support of the Marriage and Conscience Act (an Indiana-esque "license to discriminate" bill), the blowback continues to roll in. 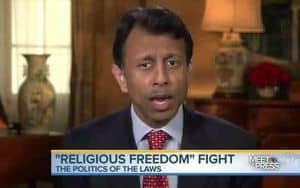 In response to Jindal's April 23 Op-Ed in the New York Times, HRC has penned (literally) a particularly imaginative response, going over the Op-Ed with a fine tooth comb, and offering edits to the governor's rhetoric. Said strategist Chad Griffin on Twitter:

Hey, Gov. @BobbyJindal, @HRC edited your op-ed for you. You got a lot wrong. #RFRA #LGBT http://t.co/gw3SK7eJHn pic.twitter.com/xtxrpEEsPJ

Most satisfying are the moments when HRC offers deconstructions of opaque conservative jargon. The HRC response pulls no punches, pointing out the impreciseness of terms in the Op-Ed such as: "radical liberals," "discrimination against Christian individuals," "government coercion," and more. It's the perfect antidote to Jindal's extremist hate-mongering.

Check it out, below:

Previous Post: « Laverne Cox and Janet Mock React to Bruce Jenner’s Coming Out as Trans: VIDEO
Next Post: Adam Lambert Says He Has Slept With ‘A Few’ Closeted Celebrities »