During a debate last Sunday on Ireland’s upcoming same-sex marriage referendum, a ‘Yes’ campaigner was continually badgered by his opponent about how two men actually have sex

During a debate last Sunday on Ireland’s upcoming same-sex marriage referendum, a ‘Yes’ campaigner was continually badgered by his opponent about how two men actually have sex, reports The Journal.

Declan Meehan of Yes Equality Donegal was discussing the referendum on Ocean FM with Isaac Burke of Mandate for Marriage who throughout the interview fixated on the “sexual aspect” of marriage equality.

Mandate for Marriage believes that the scourge of same-sex marriage will lead to "other forms of ‘marriage’ being affirmed such as polygamy, endogamy and child marriage."

“The common denominator for the LGBT community is their sexual activity and we have to get back to the facts of that being true,” said Burke.

“The fact remains that the sexual conduct between two men and two women ought not to be given the same legal status as that between a man and a woman.”

When Meehan and host Niall Delaney suggested that Burke was attempting to debase the argument, Burke replied that gay people are using their god-given “heterosexual bodies…in a way that it’s not designed for,” thereby causing themselves great suffering.

At this point, Burke possibly finally the real reasons behind the ‘No’ campaign’s opposition to gay marriage – sex between two men is icky:

When pushed to stick to the issues at hand, Burke insisted that Meehan explain in precise detail the gay “sexual act.”

Somehow managing to retain a sense of calm, Meehan suggested that Burke “take a long hard look at himself.”

Burke and fellow ‘No’ campaigners have so far remained silent on the important issue of how lesbians have sex.

Listen to the interview and watch Mandate for Marriage explain why god says no to marriage equality, AFTER THE JUMP…

Earlier this month, Pastor Craig Ledbetter of the Bible Baptist Church in Cork has compared homosexuality with rape and adultery.

A poll in March found that 74 percent of the electorate intend to vote in favor of same-sex marriage. 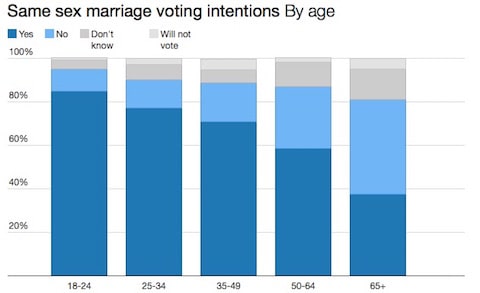