Kentucky Governor Steve Beshear argued in a brief filed last week before the U.S. Supreme Court that the state’s ban on same-sex marriage is not discriminatory because both gay and straight people are banned from marrying people of the same gender, reports the Courier-Journal. 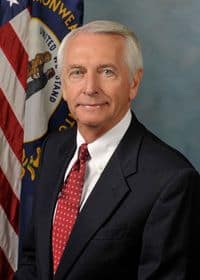 In 1967, the Supreme Court rejected that argument in the historic case of Loving v. Virginia, in which a white man and a black woman were charged with a crime for marrying.

According to Dan Canon, a lawyer for six gay couples challenging the state’s same-sex marriage ban in a case to be argued at the Supreme Court on April 28, Beshear's argument is "especially absurd" as applied to same-sex marriage:

"Kentucky is in essence saying that our clients are precluded from marriage entirely, unless they change their sexual orientation (or simply marry someone to whom they are not attracted). It's akin to passing a law banning all Catholic churches within city limits, and then saying it's not discriminatory because you can still go to a Baptist church.”

Arguing that Beshear’s defense of marriage inequality “has really hit a new low,” Sam Marcosson, a professor of constitutional law at the University of Louisville's Brandeis School of Law, added:

"I wonder what Governor Beshear and his lawyers would say if the shoe was on the other foot, and if the only option for marriage was of the same-sex variety. Whatever his reasons, the governor has set Kentucky on a course of fighting to preserve invidious discrimination, and he has waged that fight in a deeply embarrassing way. The taint to his legacy will be difficult for history to ignore."

Although Beshear has refused to comment, Mat Staver of listed hate group Liberty Counsel said that same-sex couples are not "similarly situated" to opposite-sex couples and therefore are not entitled to equal protection under the law.

In 2013, Beshear vetoed a bill which would allow religious individuals to claim an exemption from any law or policy that prohibits discrimination.