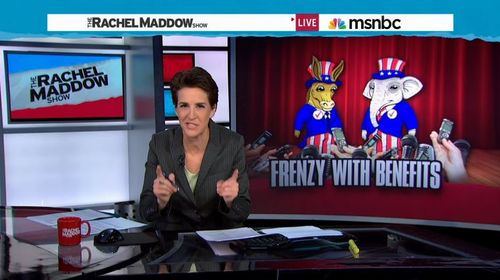 With the 2016 presidential campaign underway, Rachel Maddow this week took a look at the media frenzy surrounding the declared candidates and the GOP's tightrope walk on issues like gay rights.

"One happy byproduct of, one benefit of the frenzy is getting to see them invent new lines for themselves to tiptoe down as they try on the spot to invent reasonable sounding, anti-gay policy positions that accomplish this neat trick of not turning off the vast majority of the country by seeming too much like a homophobe but also seeming aggressively anti-gay enough to be electable inside the super anti-gay Republican base bubble."

Later, Maddow chatted with former White House press secretary Robert Gibbs about the culture war's role on the GOP side and the various campaign trail "trap door" questions that await candidates on both sides of the aisle.

Dig in, AFTER THE JUMP…