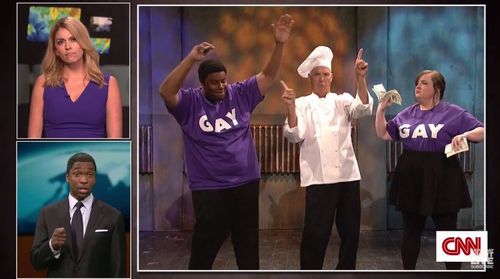 On SNL's CNN Newsroom sketch last night, Brooke Baldwin (played by Cecily Strong) walked viewers through all the major headline news from this past week – the Germanwings plane crash, Iran nuclear weapons deal, and the "religious freedom" debate in Indiana and Arkansas.

"We couldn't get a CNN reporter in either of those states, but we might have something even better," Baldwin said. "A local performance art group has agreed to give us a general sense of what's been happening in both those states."