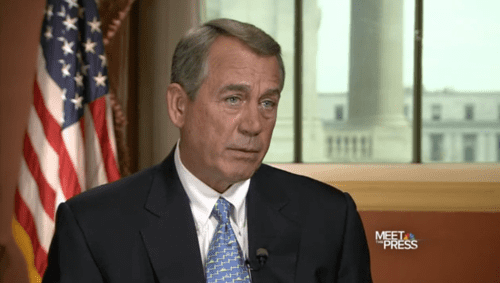 On Meet the Press on Sunday, Chuck Todd sat down with House Speaker John Boehner (R-OH) to talk about a number of issues 2016, Benghazi, health care, and the upcoming SCOTUS marriage ruling.

Back in 2012 and 2013, of course, Boehner authorized a budget of $3 million to wage a losing battle to defend the Defense of Marriage Act. The Speaker has also said that he "cannot imagine" supporting marriage equality even if his own son were gay.

"If the Supreme Court rules how a lot of people expect them to rule, legalizing same-sex marriage in all 50 states, do you anticipate gaveling a platform of the Republican party at the Cleveland convention in your home state of Ohio that is still going to have a platform calling for a constitutional ban on same-sex marriage?"

"I don't know what's going to happen at the Republican convention. But listen, I believe in traditional marriage, but I also respect the views of others. I'll let the Court make their decision but at the end of the day the states are well equipped to deal with this. They've been dealing with it, and they should continue dealing with it."

Asked why he didn't sign on to an amicus brief by Republican members of Congress opposing marriage equality, Boehner added:

"I have no idea. Probably because I wasn't asked. I probably would have signed on."