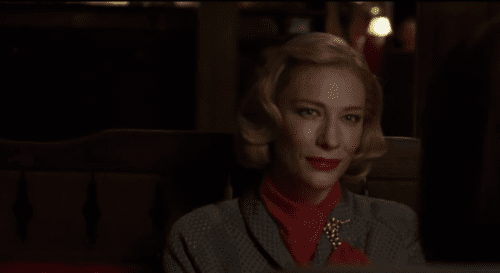 Carol, the upcoming movie based on Patricia Highsmith’s The Price of Salt, tells the story of two young women living in mid-20th century New York who quickly find themselves falling in love with each other. In an interview with Vanity Fair, Cate Blanchett, who plays the film’s titular character describes how she drew upon her own experiences with same-sex relationships to shape her performance as Carol Aird. When asked to clarify exactly what she meant, Blanchett explained that while she’s now a married mother of four and in a long-term relationship with a man, she’d been romantically involved with women “many times.”

"I don’t think Carol thought about it,” Blanchett mused, adding that she’d never thought much of her own lesbian experiences.

Blanchett was careful not to self-identify as queer or bisexual, echoing the way that her character likely made sense of her desired. The Price of Salt, became a standout piece of work soon after it was published in large part because of the nuanced way that it handled its characters’ identities. Unlike many pulp novels depicting people that we would think of as gay or lesbian by modern standards, Salt respected queerness and allowed for Carol to experience her life as a person not entirely defined by her sexuality.

“Her sexuality isn’t politicized,” Blanchett elaborated. “I think there are a lot of people that exist like that who don’t feel the need to shout things from the rafters.”

Watch a clip from Carol, AFTER THE JUMP…