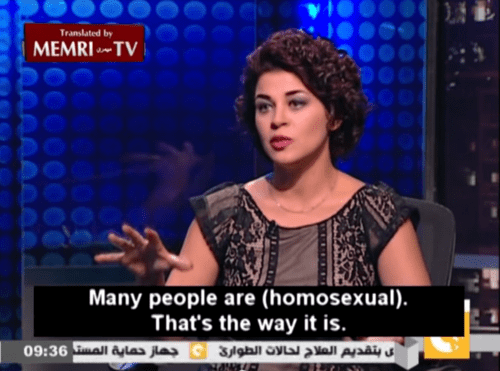 In an interview with Egypt's ONTV station back in April that began surfacing online this past week, Egyptian actress and comedian Mona Hala's can be seen giving a passionate defense of the Egypt's increasingly embattled LGBT community.

"(Homosexuality) has existed since ancient times. Many people throughout history have been like that, so who are we to judge them? Alexander the Great, who built Alexandria was (homosexual). Is that a reason to destroy Alexandria or to change its name?

Hala also spoke out against last month's news that Egypt's Administrative Court had set a precedent allowing the government to forcibly deport people suspected of being LGBT:

I'm against it. Let's say that someone has (homosexual relations) in his country and he wants to come to Egypt to see the antiquities and so on. What right do you have to prevent him from doing so? I don't get it.

Watch more of Hala's interview, AFTER THE JUMP…