During his commencement speech at Virginia’s Liberty University on Saturday, Jeb Bush accused the Obama administration of using “coercive federal power” to prevent Christians from pursuing their right to discriminate 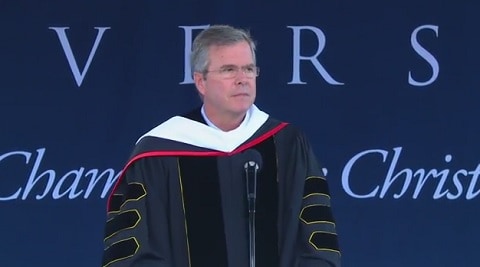 During his commencement address at Jerry Fallwell’s Liberty University in Virginia on Saturday, Jeb Bush accused the Obama administration of using “coercive federal power” to prevent Christians from pursuing their right to discriminate, reports TPM.

The former Florida governor did not specifically mention same-sex marriage but said that “easy calls…in favor of religious freedom have instead become an aggressive stance against it."

Although alluding to “the dignity of every person”, Bush warned about the consequences when Christians "don’t genuflect to the latest political dogmas.”

"Somebody here is being small-minded and intolerant, and it sure isn’t the nuns, ministers, and laymen and women who ask only to live and practice their faith. Federal authorities are demanding obedience, in complete disregard of religious conscience — and in a free society, the answer is no.

"The stories vary, year after year, but the storyline is getting familiar: The progressive political agenda is ready for its next great leap forward, and religious people or churches are getting in the way. Our friends on the left like to view themselves as the agents of change and reform, and you and I are supposed to just get with the program.”

“Those dogmas can be hard to keep up with. So we find officials in a major city demanding that pastors turn over copies of their sermons. Or federal judges mistaking themselves for elected legislators, and imposing restrictions and rights that do not exist in the Constitution. Or an agency dictating to a Catholic charity, the Little Sisters of the Poor, what has to go in their health plan – and never mind objections of conscience.”

Watch the speech in full, AFTER THE JUMP…

In March, Bush spoke out in favor of religious right to discriminate laws.