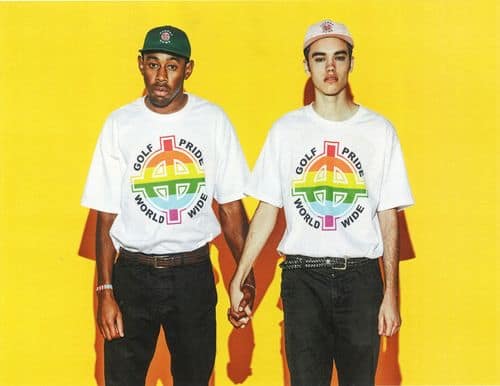 Rapper Tyler the Creator began selling a t-shirt this week under his 'Golf Wang' fashion label intended to make a statement against homophobia by appropriating a white supremacist symbol and coloring it with a rainbow.

Tyler explained on his Tumblr:

Tyler also made note of past controversies. In 2011, NME made note that his album Goblin used the word "faggot" and its variants 213 times. He explained at the time:

In 2013 he explained himself again:

”That’s just a word, you can take the power out of that word. The way that I see things, it's you choose to be offended if you care more about stuff like that. And that might sound very ignorant, but if you're a black person and someone calls you the n-word and you get offended, maybe you might be. But if I know that I'm not a n-word…I'm not gonna get offended because I know that I'm not that. Frank [Ocean] is gay and I use that word all the time. He doesn't care because he knows me. He knows when I say that word I'm not thinking of someone's sexual orientation. It's just another word that has no meaning."

Tyler said this week, in the Tumblr post explaining the anti-homophobia t-shirt: