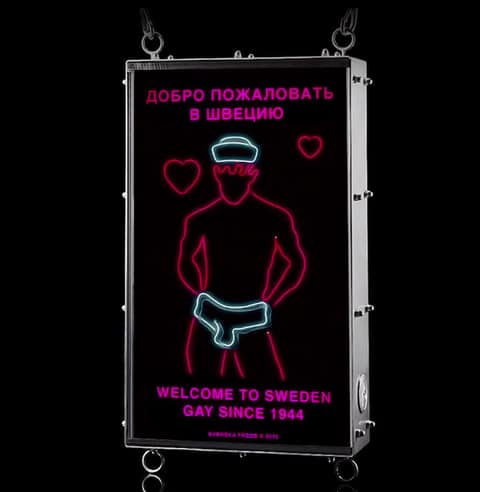 Last year, reports surfaced of submarines being spotted on local radar off the coast of Sweden, leading some to believe these submarines were of Russian origin and evidence of planned Russian aggression against Sweden. Russia, after all, has taken a hawkish stance against its neighbors in recent years, most recently flexing its military muscles in Crimea. It was the news of these alleged Russian submarines that led the Swedish government to increase its military spending after years of budget cuts. Now, a group of Swedish activists known as the Swedish Peace and Arbitration Society (SPAS) have launched a campaign intended to push back against this potential increased militarization.

To ward off Russian submarines that might wander into Swedish waters, the SPAS has created the 'Singing Sailor', a neon sign they submerged at the supposed spot of the submarine sightings. A new video from the SPAS shows the the sailor in all his glory, shirtless and dancing beneath the tides of the Baltic Sea. The sign, sure to ruffle the feather of any die-hard Putin loyalist, also reads, "Welcome to Sweden. Gay since 1944" (1944 is the year that homosexuality was decriminalized in Sweden). The 'Singing Sailor' also sends out a morse code message: "This way if you're gay."

The video is, of course, a not-so-subtle reference to Russia's treatment of its homosexual community, and the notorious "gay propaganda" laws that have sparked protest in Russia and beyond over the past few years. One of the laws sought to prohibit the education of children about "non-traditional sexual relations."

"If there is a submarine down there and there is a crew member who hears or sees the sailor, they are welcome to join us in the Pride Parade on August 1 in Stockholm," Daniel Holking, head of fundraising and communications at SPAS, said in a statement. "In times of unrest love and peace across borders is even more important than usual."

The "singing sailor" also carries an important domestic message. SPAS hopes it will serve as a reminder to the Swedish government that there are creative ways to deal with potential threats. "There are many modern examples in the world of how conflicts can be resolved without military intervention," Anna Ek, president of SPAS, said.