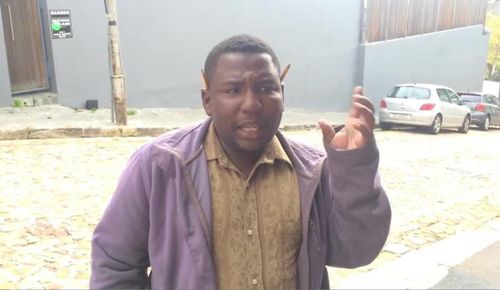 Meow, moo, baa-aaa. You can probably call to mind what it sounds like when humans do animal impressions. But the things you're about to witness are no impressions. They're something closer to ventriloquism — a kind of mystical, oral animorphism by a street performer with a rare talent.

If you're able to do a Google search with your jaw on the ground, you'll learn that the star of the video is a man named William Jafta. He lives in Cape Town, South Africa, and thanks to Reddit, he's probably going to wake up tomorrow a viral sensation.

You can find videos scattered around YouTube that show Jafta performing around Cape Town in squares and on trains. He's totally amazing.

So why animal impressions?

You might have guessed: Jafta's not just doing it for fun. As he explained in a video last summer for the Daily Sun, South Africa's largest daily newspaper, he started busking because he was unemployed and needed the money to support his family.

Today brought us this most recent video of Jafta's virtuosic mimicry. That's great. But it also brought news that South Africa's unemployment rate has hit a 10-year high of 26.4 percent. So enjoy Jafta's cats, horses, and roosters. But don't forget what's putting him out in the square.

Previous Post: « Rick Santorum Is Running For President Again
Next Post: Germany: ‘Same-Sex Marriages Are Not A Goal Of This Government’ »