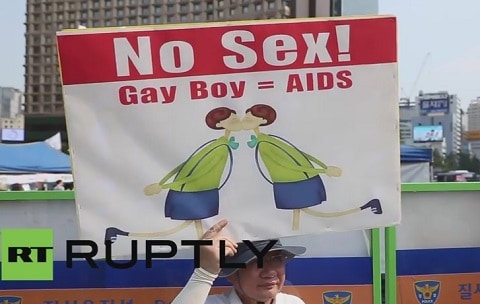 Christian groups had been campaigning since May to try to block the parade. Police initially responded by canceling the parade citing the conflicting permit applications. However, earlier this month, a court ruled that the parade had to be allowed. Christian activists then showed up Sunday to protest the parade. The protest was organized by the Korean Churches Anti-LGBT Response Committee.

Protesters wore visors with the slogan “Oppose Homosexual Provocation” and held a banner with the words “We pray for korea not to be diseased/sick with homosexuality.”

One woman held a sign reading, “Same sex marriage is not a human right.”

Protesters attempting to block the Pride parade route by lying down in front of the floats were removed by the 5,000-strong police force.

A city spokesman said complainants argued the parade was inappropriate after a recent ferry tragedy. However, Pride organizers claimed Christian groups filed complaints deliberately in order to get it cancelled.