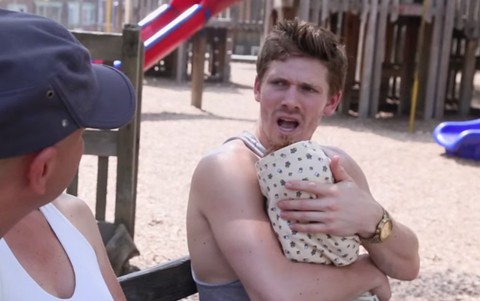 Just in time for Father’s Day comes a new video from the website Gays With Kids that sheds light on all the questions (some ridiculous, some offensive) that gay dads often get asked by strangers. Things People Ask Gay Dads highlights a handful of some of the funnier examples, such as, “Your sperm? His sperm? How does that work?”, and “Who does the mommy stuff?”

Brian Rosenberg, a co-founder of Gays With Kids, spoke with OUT about the motivation behind creating the video:

“Our aim was to create content gay dads would enjoy that would also serve to inform and inspire others,” says Brian Rosenberg, co-founder of Gays With Kids, a website that helps gay dads navigate fatherhood from creating families to raising them. “Gay fathers share all the universal truths and challenges of parenting that are experienced by dads and parents everywhere, but we also face many that are uniquely our own, like dealing with homophobia, guiding daughters through puberty, and coming out. We have also traveled many different paths in order to become dads. In celebration of Father’s Day, we’re exploring these issues and more in the videos and e-book.”

To all the gay dads out there, what’s the most ridiculous question you’ve ever been asked?

Previous Post: « Andy Cohen Reacts To ‘Bitch, I’m Madonna’ (Plus A Behind The Scenes Look At The Music Video) – WATCH
Next Post: Open Your Ears for Lady Gaga’s Mindblowing Cover of John Lennon’s ‘Imagine’ – LISTEN »